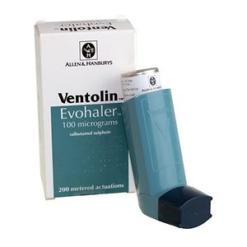 Range of treatments suitable for you.

Ventolin Evohaler is used to treat breathing problems in people with asthma and similar
conditions. This includes relieving and preventing asthma brought on by exercise or other
“triggers”. These are things, which bring on asthma symptoms in some people. Common
triggers include house dust, pollen, cats, dogs and cigarette smoke.
Ventolin Evohaler contains a propellant called HFA 134a. This is less harmful to the
environment than older inhalers. Older inhalers may taste differently to Ventolin Evohaler.
This will make no difference to how your medicine works.

If you are allergic to salbutamol sulfate or any of the other ingredients of this medicine, you should not use it.

Also, avoid using it if you unexpectedly go into early labour (premature labour) or threatened abortion.